Do you already play badminton and want to progress in this discipline?

Badminton is both a physical and a technical sport requiring great mental resources as well as an analytical capacity in order to establish the right playing strategies.

In this article, here are our tips for improving badminton.

As long as one does not fully master the technical basics of badminton, there is no point in wanting to improve and progress by learning advanced techniques.

Here are some basics to master:

Learn to read the opponent’s game

Decipher your opponent’s game, exploit his weaknesses and avoid playing on his strengths as much as possible.

Play on your opponent’s weak side (usually the backhand), if your opponent isn’t comfortable with smashes, overuse high shuttlecocks. Is he not very mobile? Make it run by alternating lobes / cushioning and short play / long play, etc.

Play to your strength

As much as you have to play on the weaknesses of your opponent, you have to maximize your strengths and organize the game in order to exploit your maximum potential.

One example among many, if you like to play from the baseline, organize your game to leave as few solutions as possible for your opponent to get you to the net.

Improving movement is the most important axis of work in badminton.

Although it does not directly allow you to gain a point, displacement, whether lateral or longitudinal, is an essential tool accompanying players both in defense and in attack.

The ideal position should promote explosiveness and leaping regardless of the direction chosen.

The bust should be tilted slightly forward.

An effective exercise to improve your movement is the Shadow with a partner.

The goal is simple, each in his part of the field, your partner simulates movements and strikes, on your side you must reproduce his movements in mirror.

The objective is to fall behind the opponent as little as possible and to be as responsive as possible.

In badminton, one of the keys to hitting power is body relaxation.

Being relaxed maximizes range and fluidity of movement when typing.

Especially important is the relaxation of the elbow, be careful not to stiffen it.

The wrist ends the hitting movement and must reflect all the elasticity of the movement by whipping the wheel.

It is also important to “cross” the steering wheel with your whole body.

The effectiveness of a smash does not depend on the muscle power of the player but on the technique of his movement.

It is important to transfer the load from front to back and then rotate the pelvis when shooting.

The technique for hitting a smash is as follows: 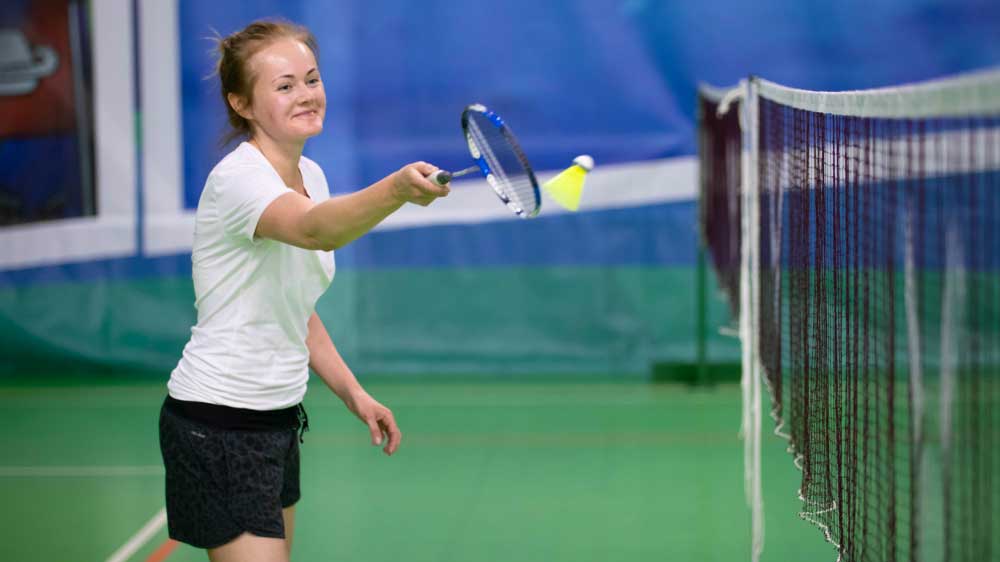 The long serve is used by both beginners and experienced players alike, you must master this movement perfectly.

The movement consists of performing a forward-to-back transfer in order to accompany the racket with the body and give the shuttlecock an ideal parabolic trajectory.

You should be relaxed and relaxed, and be careful not to squeeze the racquet too hard.

You should get back up immediately after the serve by positioning yourself behind the T, keeping your legs bent and the racket high.

Work the backhand from the baseline

While the forehand is usually a priority, the backhand from the baseline is a stroke, albeit difficult to master, that can help gain the advantage in many situations.

The basic position is carried out with a rotation of the chest allowing you to find yourself back to the net when hitting.

During a backhand from the baseline, it is the whip of the wrist and the agility of the forearm that make the difference, not the power of the stroke.

The strike of the steering wheel must be done as high as possible.

This stroke allows you to keep or gain the advantage over your opponent by forcing him to get closer to the net.

Following a short stance amortization, either the opponent will raise the wheel which will give you the opportunity to spike. Either it will cushion against which will allow you to run it while playing from the baseline.

Counter amortization is used to reverse the trend of a trade if you lost the advantage by being amortized.

To master the back cushioning you must:

Work on return of service

Being part of the first 3 exchanges, the return of service is essential and makes it possible to engage the point to its advantage.

It is essential to have a waiting position by having the legs flexed ready to react.

When the opposing service is of poor quality / missed

A failed serve gives you an advantage from the start, it’s up to you not to waste it and take advantage of it in order to gain the point as quickly as possible.

When the opposing service is good / successful

Three return areas should be favored:

Learning many moves will allow you to vary your game. You will thus have the possibility of disturbing your opponent by becoming unpredictable.

Make sure you are always one step ahead of your opponent. During the rally, build up your point and take your opponent to wherever you want in order to trigger the winning shot or cause the foul.

Finally, remember that only work will make you progress. Repeat the movements and be regular in your workouts.

Canoe or kayak: What are the differences?