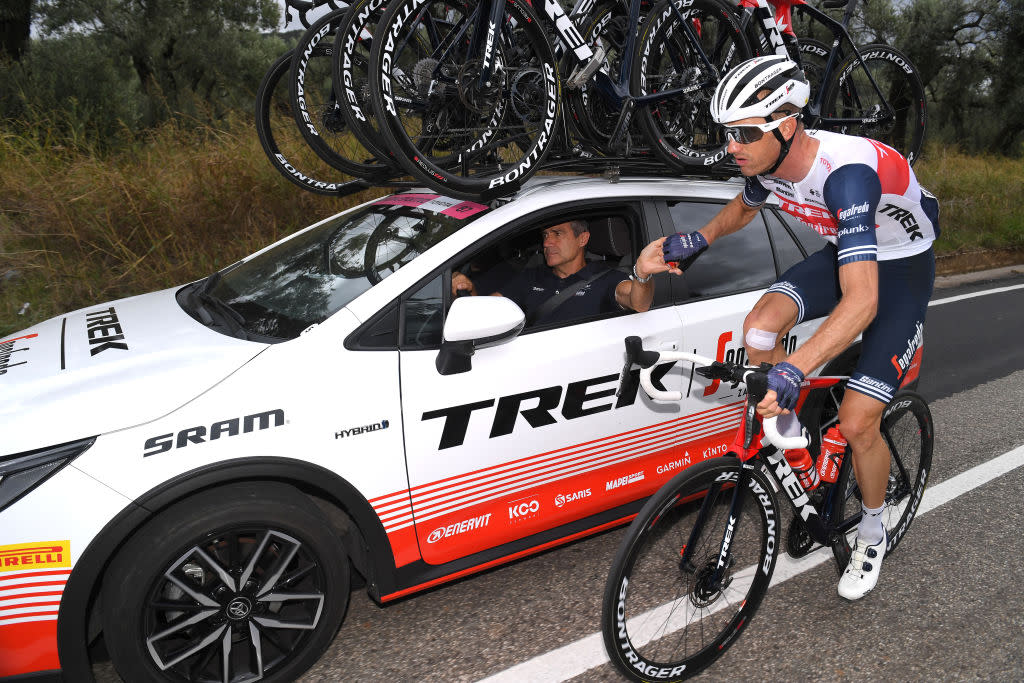 Pieter Weening retires after 17 seasons as a professional

Pieter Weening has announced his retirement from professional cycling, bringing an end to his 17-year stint in the peloton. The Dutchman raced for Rabobank, Orica GreenEDGE, Roompot and, most recently, Trek-Segafredo in a career that began in 2004.

“I’m happy to announce it now that I feel confident and happy to be able to do it. For almost 20 years, I did the job I dreamed of and loved,” Weening said in a communiqué issued by his Trek-Segafredo team. “I enjoyed every season I raced, and I feel really grateful for this. But in the last weeks, I serenely said to myself that it’s enough.”

Weening’s career had looked to be drawing to a close last winter, when the Roompot-Charles team ceased operations and he was left without a contract as the 2020 season began. Despite the hiatus for the COVID-19 coronavirus pandemic, however, Trek-Segafredo added Weening to their roster, and he was part of the team that supported Vincenzo Nibali at the Giro d’Italia in October.

Double joy for Weening in Orvieto

A crash in the opening week forced Weening to abandon the Giro on stage 5 and that proved his final act as a professional. The 39-year-old formally confirmed his retirement on Friday.

“When I joined Trek-Segafredo in February, after talking with Luca Guercilena and Steven de Jongh, I told myself to see how the Giro would go and then make a decision,” Weening said. “A stupid fall in Stage 4 – which still makes me angry when I think about it – left a heavy mark. The next day I had to withdraw from the race, and I went home with the after-effects of a concussion. I thought I would recover for the Vuelta a España, but the doctors imposed absolute rest. That is when, with my mind at ease, I understood that the time had come. It was not the body that told me to stop, but more the spirit.”

A native of Friesland, Weening’s first professional win was perhaps his most famous, as he pipped Andreas Klöden by the narrowest of margins in a two-up sprint in Gérardmer to claim stage 8 of the 2005 Tour de France.

Weening would later go on to land a dozen more victories, including two stages at the Giro d’Italia. The first was a solo triumph on gravel roads at Orvieto in 2011 and it led to a four-day spell in the maglia rosa. Three years later, he added another Giro victory, outsprinting Davide Malacarne on the Passo del Lupo above Sestola.

He left the WorldTour for Dutch Pro Continental squad Roompot ahead of the 2016 season, and he immediately weighed in several victories as a team leader, including the Tour of Norway and a stage in that year’s Tour de Suisse. Weening’s final professional win was a stage at the 2019 Tour de Luxembourg.

“I can say I’m happy about what I achieved. I always raced in great teams as well as in amazing groups of people. I think this was a key motivation for me. I always felt the push to be part of a team spirit, to pursue a common goal, and to do better every year to achieve this,” said Weening, who competed in 16 Grand Tours during his career.

“I carry with me a lot of good memories from cycling. The victory at the Tour in 2005 and those at the Giro in 2014 and 2011, with four days in maglia rosa, were the highest moments,” Weening said. “But I recall with pleasure also the Giro team time trials in Belfast in 2014 and the one in 2015 with Orica, both stunning team performances. I have so many facts and memories for each year that make me feel lucky for this long adventure. Also, thanks to this, I am now ready and happy to look toward something else.”

Today’s cycling-related highlights from the Black Friday sales. For even more, view our guide to the best Black Friday bike deals where you’ll find on all things cycling, including bikes, helmets, clothing and more.

In Chicago, waiting for the owner to die is a long-standing tradition

Is England vs Wales on TV? Kick off time, channel and everything you need to know