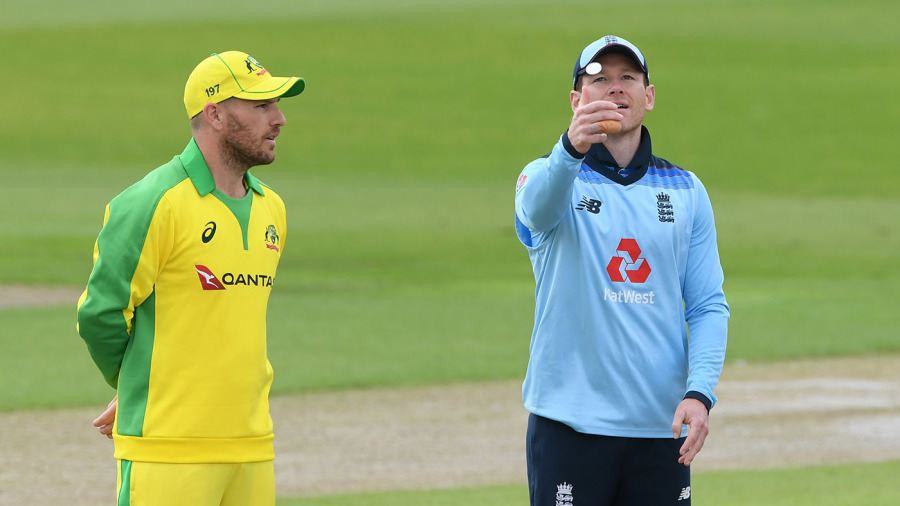 England won the toss and chose to bat v Australia

England will bat first after winning the toss ahead of the third and deciding ODI against Australia at Emirates Old Trafford.

The sides are 1-1 in the series so far following Australia’s 19-run victory in the first game and their monumental batting collapse in the face of some wonderful bowling by Jofra Archer, Chris Woakes and Sam Curran, which handed England victory by 24 runs in the second match.

Steven Smith is missing again after suffering a blow to the head during training, which kept him out of the first two fixtures. He had been in doubt after Justin Langer, the Australia coach, had described Smith’s nets session on Tuesday as “a bit rusty”. Marcus Stoinis, who has deputised at No. 3 in the first two matches, holds his place in an unchanged side.

Captain Aaron Finch said Australia were taking a “conservative approach” after Smith pulled up below par from training on Tuesday. “He was a little bit groggy and just wasn’t 100 per cent,” Finch said.

England have made one change, leaving out Curran for Mark Wood, who has overcome the ankle niggle which sidelined him from the second match on Sunday and who offers some extra pace, with play set to begin in gorgeous sunshine on a fresh strip with a short boundary towards the temporary stand.

Candace Parker Wants You to Know She’s Not Done Yet

Pinot, the failure too?

Can Kepa, the world’s most expensive goalkeeper, save his Chelsea career before it’s too late?

Kepa Arrizabalaga is used to things happening fast. Aged 23, he had made 53 La Liga appearances when Chelsea made…

New Zealand rugby officials are “disappointed” over the Rugby Championship schedule, saying they did not agree to a change in…