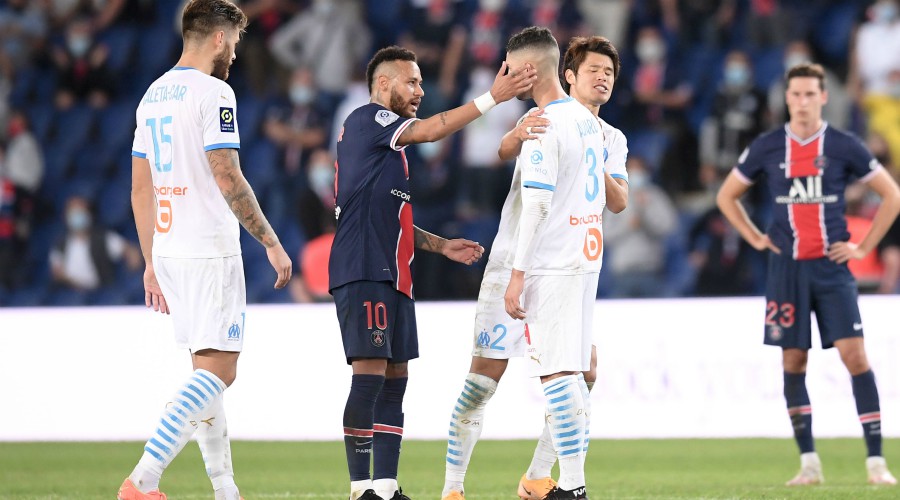 PSG-OM, the sanctions have fallen!

The Disciplinary Commission of the League had work on Wednesday evening, invited to look into the many incidents that had punctuated the clash between PSG and OM last Sunday.

Last Sunday, at the Parc des Princes, it was a sad spectacle that the two best teams in the championship offered in the 2019-2020 standings. The players of Paris Saint Germain and theOlympic Marseille have multiplied provocations and bad gestures, so much so that no less than five red cards came out of the pocket of the central referee, Jérôme Brisard.

Three days later, the Disciplinary Commission of the Professional Football League (LFP) delivered its verdict. Among the expelled players, Layvin Kurzawa is the most heavily punished. The left side, at the origin of a fight with Jordan amavi, will have to serve six suspension matches! His direct opponent in this brawl, the left side of OM, takes three matches.

Leandro Paredes will have to spend two matches in the stands, but will keep a reprieve match with the sword of Damocles above his head. The Brazilian Neymar, guilty of a pat on the head ofAlvaro Gonzalez, is housed in the same boat. The Argentine striker of the Phocaeans, Dario benedetto, will serve him only one suspension meeting, from Thursday evening when his team will battle against AS Saint-Etienne at the Vélodrome stadium.

For Angel Di Maria, concern may grow in the ranks of Ile-de-France. The images of a sputum intended for the number 2 of OM will be scrutinized, and the former Manchester United winger will have to come and defend his case before the Disciplinary Committee next Wednesday, September 23. For Alvaro Gonzalez, the competent authorities have chosen to place the case under investigation, perhaps waiting to have more information concerning the accusations of racist insults launched against him by number 10 of the PSG.

Overwhelming new images for Neymar
Tuchel dropped by his players?
Mbappé, the huge offer that Real Madrid is preparing

OM could invest up to 15 million euros to recruit their next striker, according to RMC. Enough to relaunch the track leading to the center-forward of Reims?

Rana Naved-ul-Hasan speaks out about 'systematic taunting' at Yorkshire

GP Emilie-Romagna: Quartararo in Q2 but Zarco in Q1

‘Greatest Met of All Time’: Tom Seaver Is Mourned Across Baseball