Home > Sport > News > Another highlight from Tua, a reason for Friday’s delay and news from Dolphins practice 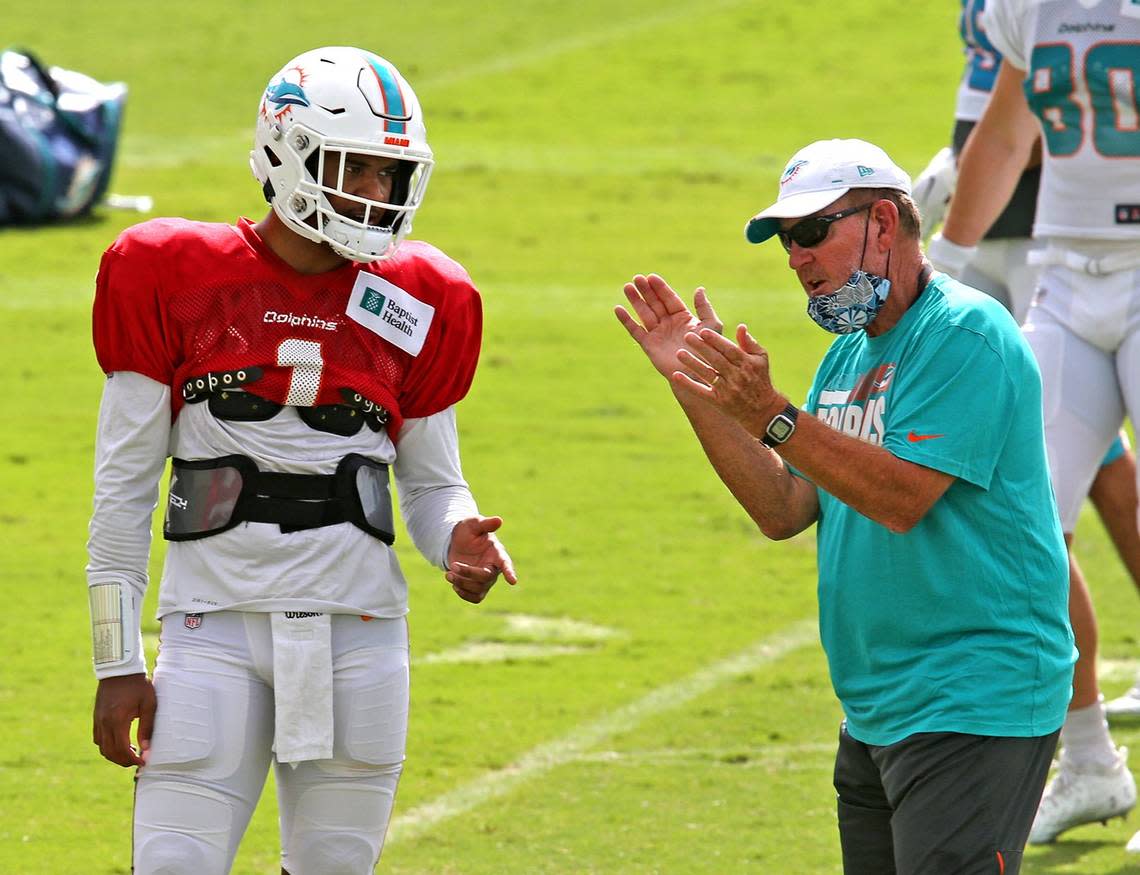 Another highlight from Tua, a reason for Friday’s delay and news from Dolphins practice

Highlights from the Miami Dolphins’ ninth padded practice of training camp on Friday:

▪ Instead of canceling practice in the wake of the police shooting of a Black man in Wisconsin, coach Brian Flores instead had an on-field group discussion during the first 20 minutes of practice.

Players gathered in a circle, and individuals stepped forward to address the group.

Ten NFL teams have canceled practice over the past two days to protest racial injustice.

▪ On the quarterback front, Fitzpatrick was very good early, Tua Tagovailoa came on strong later with two touchdown passes in 11 on 11 red zone drills and Josh Rosen did not even throw a pass in those teams drills.

During full 11 on 11 work, Fitzpatrick completed a beautiful 20-yard pass to Preston Williams, who made a very impressive sideline catch over Byron Jones.

Fitzpatrick later completed a 40-yard pass down the seam to Jakeem Grant, who initially bobbled the ball but hauled it in. He also had a 10-yard completion to Mack Hollins.

In goal-line work, Fitzpatrick had a 14-yard TD pass to Myles Gaskin but had passes broken up by Eric Rowe and Noah Igbinoghene.

During his 11 on 11 work, Tagovailoa began the day rolling out and throwing a 20-yard pass to Chester Rogers, who was called for pass interference with Breon Borders in coverage.

Tagovailoa then threw a screen to Matt Breida for a sizable pickup, but then had a pass batted down by defensive lineman Zach Sieler.

And tight end Chris Myarick then failed to turn to catch the ball on a sideline pattern from Tagovailoa — clearly a miscommunication between the two.

On his next set of 11 on 11 work (with the team practicing in the red zone), Tagovailoa threw a perfect 15-yard pass to Adam Shaheen in the corner of the end zone for a touchdown, then had a short completion to Ricardo Louis and then threw across the middle for a 15-yard TD pass to Malcolm Perry.

Meanwhile, Rosen made an appearance late in team drills. He was given one opportunity to pass but didn’t get the ball off because Andrew Van Ginkel applied pressure on a would-be sack.

Tagovailoa is clearly being given every opportunity to win the backup quarterback job, after Rosen had a more prominent role to start camp. Fitzpatrick remains the very likely starter for the Sept. 13 opener at New England.

▪ Cornerback Xavien Howard had limited participation in practice one day after coming off the COVID-19 and PUP lists. He didn’t participate in team drills.

▪ Receiver DeVante Parker did not practice for a second consecutive session, though a source reiterated he doesn’t have any notable injury of concern and there’s no other worrisome issue. He was at practice in street clothes and appeared in no discomfort but worked on the side.

Receiver Kirk Merritt (hamstring) and running back Salvon Ahmed also did not practice. Ahmad, the undrafted rookie from Washington, was claimed off waivers from San Francisco on Wednesday.

▪ Running back Patrick Laird was back at practice after missing two sessions with a shoulder injury. But he was wearing a red no-contact jersey.

▪ We’re not permitted by the Dolphins to identify who’s playing on the first team or any other team.

But we can tell you this: Rookie offensive lineman Robert Hunt is making clear progress in the eyes of the coaching staff and shouldn’t be counted out for major playing time.

It remains to be seen where Hunt will play; when the Dolphins drafted him, they believed he could play both guard and tackle.

▪ Another rookie also making progress in the eyes of the coaching staff: third-round pick Brandon Jones.

Though he’s a safety by trade, he has considerable experience playing cornerback in nickel packages at Texas, and previously told us that he has been doing that some for the Dolphins.

▪ Andrew Van Ginkel continues to impress. On Friday, he got pressure on Fitzpatrick, forcing him to throw the ball away.

▪ Sieler, competing for a backup defensive tackle job, followed the bat-down of the Tagovailoa pass by limiting Matt Breida to a short gain on a running play.

▪ Davon Godchaux had a nice stop on a Jordan Howard run, limiting him to a yard or two. And Elandon Roberts limited a Gaskin run to a short gain.

▪ Receiver Ricardo Louis had a false start, with Flores continuing to opt to use officials at practice.

▪ Michael Deiter has made progress in his conversion to backup center, which likely led to Miami parting with South Carolina rookie Donell Stanley.

▪ Gaskin ran the ball hard on a 15-plus yard touchdown run in red zone drills but was also quickly stopped by cornerback Nik Needham on a goal line run.

With Laird limited this week, it’s too early to determine who will be Miami’s next-in-line running back behind Jordan Howard and Breida. But Gaskin has made a strong case.

▪ The Dolphins are expected to scrimmage on Saturday at Hard Rock Stadium.

NFL 2020: Who really knows what to expect on field and off?

'You can hear yourself breathe': Ban on fans changes US Open

When the President of Catalonia bids farewell to Messi