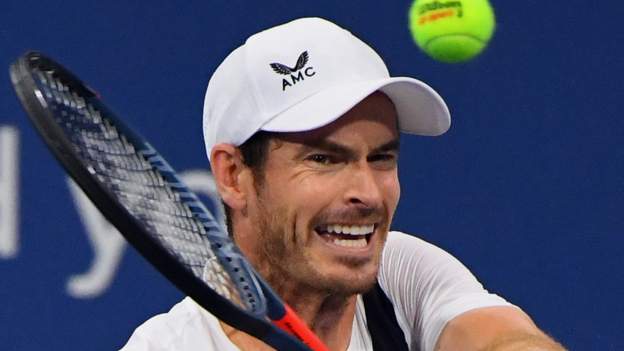 Fit-again Murray hopes to inspire others

Britain’s former world number one Andy Murray says he hopes to prove to other athletes they can still compete at the highest level with a metal hip.

Murray, 33, is making his latest comeback after having the hip resurfacing operation in January 2019.

He beat world number seven Alexander Zverev in the Western and Southern Open, before losing to Milos Raonic.

“Hopefully I have inspired some people who have got these issues and might have the operation,” said the Scot.

“To try and show that you can keep going.”

Murray is the first player to return to singles after the operation, which sees the femur head capped with metal and put into an artificial socket.

The three-time Grand Slam champion thought he would have to retire by having the operation, breaking down at the 2019 Australian Open when he announced the news.

After having the operation with Royal surgeon Sarah Muirhead-Allwood, Murray returned to action five months later in the doubles and then to singles matches last August.

“It’s a challenge playing with a metal hip. It’s not that easy,” said Murray, who will now focus on next week’s US Open.

“There are a lot of people that told me I should stop, which probably made me want to do it even more. A few surgeons and things that told me it was done, which annoyed me a lot.”

But Murray has since suffered niggling pelvic and shin injuries, meaning the Western and Southern Open was his first top-level tournament since the Davis Cup in November.

“After the latest setback in November, I was pretty gutted, to be honest, about that,” he said.

“It was, like, ‘I’m back, I can play, I can compete, I can win tournaments’ and stuff, and then I got a setback and I didn’t really know whether that was going to get better or not, so that was hard.

“But I think if I can stay healthy, I’ll have some more good moments on the tennis court.”

'So much more to achieve': Jamie Vardy extends Leicester City contract to 2023