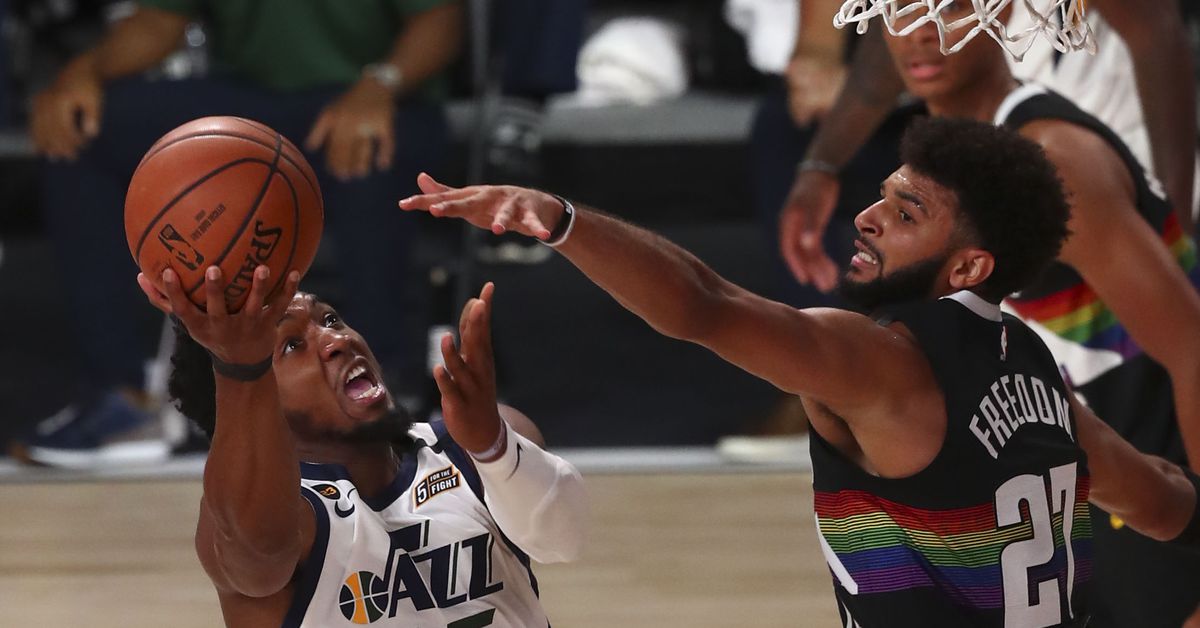 One of the lone bright spots of the series between the Denver Nuggets and Utah Jazz has been the continuing evolution of Jamal Murray.

After essentially going AWOL in the first six quarters of his debut playoff series last year, Murray erupted onto the scene with a huge outburst in Game 2 against San Antonio and the rest was history. His final postseason numbers in 2018-19 were more than respectable: 21.3 points, 4.4 rebounds and 4.7 assists on 48% shooting and 33.7% from three.

But there were still glaring deficiencies in his offensive game. Murray is a career 35.8% shooter from three (including this season), which is decent but underwhelming for a would-be elite scorer in today’s NBA. His volume of threes is underwhelming as well – barely over five attempts per game. The other knock on his game is consistency. When he’s hot, it’s hard to find another player who can outshoot Murray. For every 20+ point scoring outburst, however, it seems that there’s a handful of games where he finishes in the teens.

At surface level the 2019-20 regular season didn’t really show improvement for Murray. His numbers this year are freakishly identical to last year:

The playoffs, however, are where it looks like Murray is finally making his leap. Jamal put up a vast majority of his 36 points in Game 1 during the fourth quarter and overtime to help Denver get the win (and avoid the sweep…), and of course on Sunday he dropped a Nuggets playoff record 50 in the loss. His output has skyrocketed: 28 points, 6 rebounds and 6.5 assists while shooting a blistering 52.9% from three on 8.5 attempts.

High-level consistency is still an issue. Sandwiched between the 36 and 50 point games were 14 and 12 point duds during which the Nuggets got stomped. Murray struggled mightily against the physicality of Royce O’Neal compared to Joe Ingles and just couldn’t get anything going. To truly evolve into the next level of stardom and continuity, Murray will need to adjust his game to get points regardless of his defender.

Interestingly, a prime example of that this series has been rival guard and source of pain, Donovan Mitchell.

For Nuggets fans it has been abysmal watching the byproduct of one of the worst draft night deals in team history pick apart Denver’s “defense” with minimal effort. One has to absolutely respect Mitchell’s game, though. He has an answer for everything and everyone Denver throws his way and is having an unstoppable postseason as a result.

In a vacuum, Murray and Mitchell are not that dissimilar. Both are high volume scorers capable of getting hot and taking over the game, as the historic 50+ point duel in Game 4 showed. They are about the same age though Murray has been in the league one year longer and both will be key backcourt players in the league for years to come. Both are torching this postseason with similar numbers:

What stands out in this comparison? Mitchell’s 39.5 points per game is one area. The other is the disparity in free throw attempts. Mitchell is taking 11 per game! He had 18 on Sunday. Meanwhile, Murray is averaging just 2.5. The difference between Mitchell’s 39.5 ppg and Murray’s 28, and possibly between this being a 2-2 series and Denver being down 3-1, lies at the free throw line.

Sure, Mitchell’s FTAs are probably inflated because Denver can’t guard him at all and he is able to bait every Nugget into fouling (he only averaged 4.7 attempts in the regular season). He gets a few phantom calls but for the most part they are warranted. What sets Mitchell apart from Murray besides his quickness is a willingness to get in the lane and draw the foul. Murray is a little bit more passive, preferring to pick and choose when to attack or attempt more difficult shots in lieu of going for contact.

The Rudy Gobert factor defensively cannot be ignored, but it might be overstated. Mitchell has absolutely no fear of being blocked by Nikola Jokic while Gobert’s looming presence is always a deterrent. Of Murray’s 80 field goal attempts so far this series, only 35% have been taken either in the paint or restricted area. Mitchell has taken 48%. In the regular season, the numbers are similar: 38.3% for Murray and 46.9% for Mitchell. Murray simply doesn’t shoot from the paint as often, regardless of who might be patrolling.

It is disappointing that one of the few times Murray did attack Gobert, he was clearly fouled and the refs swallowed their whistle instead. Egregious no-call aside though, when you aren’t attacking the paint as often, the refs aren’t always going to be in the habit of looking for fouls for you. Mitchell hasn’t had that problem thus far, and neither does any other legitimate star in this league. Murray’s 2.5 free throw attempts in the playoffs is tied for 54th… alongside the likes of Jerami Grant. Mitchell is third, up there with every other big name in the league.

It’s clear that Murray is taking his game to the next level. The biggest improvement has been his willingness to shoot the three and he’s converting at an insane rate. But he needs to get more aggressive in trying to draw fouls as well, especially on nights when his shot isn’t falling. Game 2 and 3 were brutal in that regard. Murray was one of the few players who was actually trying but he still couldn’t really get anything going. His combined one free throw attempt in those two losses certainly didn’t help.

Jamal Murray has been great for Denver this postseason which will bode well for his future, but 2.5 free throw attempts per game is not enough for him or for the Nuggets. He’s a career 88% free throw shooter. Those are free points he can procure for the Nuggets and for his own stat sheet. It might be too late for this series, but if Murray wants to really elevate his game even further, the free throw line is a great place to start.

Damian Lillard to get second MRI on knee after 'inconclusive' result

Djokovic, After U.S. Open, Says He Is Working on the Mental Side of Tennis