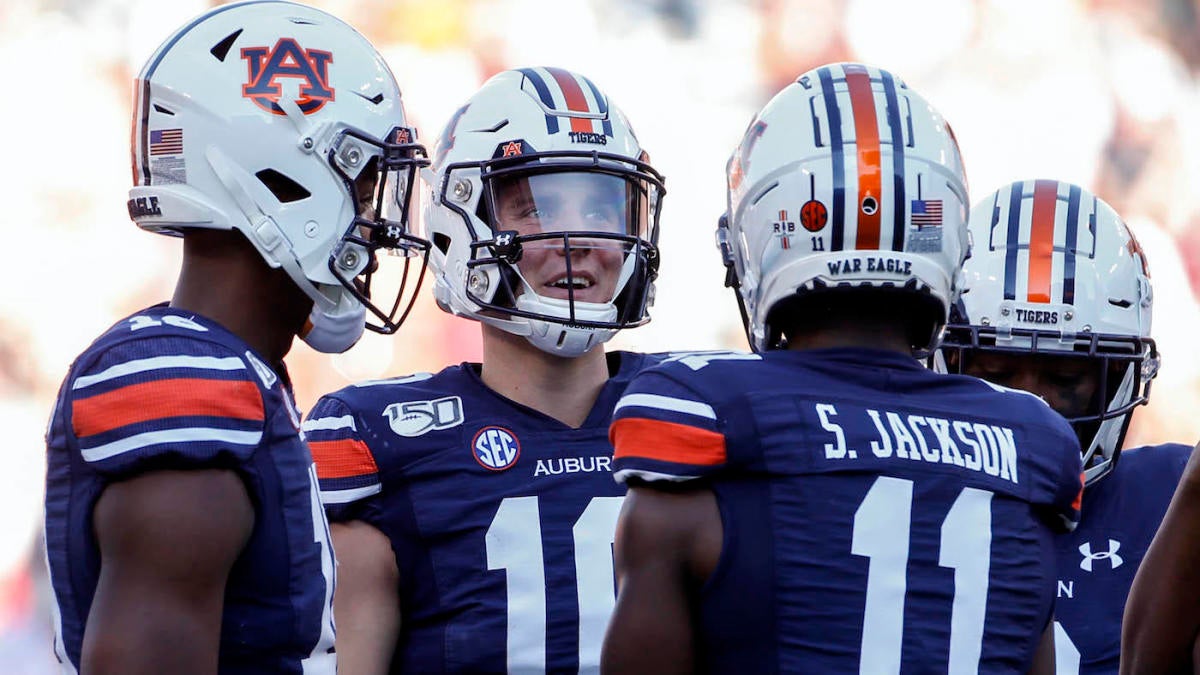 The 2020 preseason AP Top 25 poll was released Monday, and the Associated Press decided to release the poll with all 130 FBS teams eligible, even the ones who have already opted out of the 2020 season. As such, it’s somewhat difficult to get up in arms about which teams are overrated and underrated and darn it, my arms are still here, and I want to get all up in them!

So I’m taking a slightly different approach to my annual reactions to the preseason AP Top 25 poll this year. I am only going to judge the rankings of the teams still planning to play this fall. It doesn’t make a lot of sense to call a team that isn’t playing overrated or underrated because I don’t have the chance to gloat if I’m correct, nor do you get to mock me if I’m wrong.

I am looking at the schools that will play in the AP Top 25 poll and those receiving votes and will judge based on that.

When I reacted to the Coaches Poll top 25 earlier this month, Auburn didn’t make the cut but was on the precipice. I was going back-and-forth between Auburn and its fellow SEC West school No. 13 Texas A&M. I chose Texas A&M to deem as overrated then, and this time it’s Auburn’s turn. I’m not just trying to be fair here, however. This is more a statement of intent.

Having Texas A&M at No. 13 in the Coaches Poll top 25 did feel a bit high, but I also wrote a story during the offseason in which I called the Aggies a darkhorse. I still believe a lot of what I wrote is true, even if the team’s schedule did become more difficult in the updated SEC version. But so did Auburn’s.

The truth is, if I’m picking between A&M or Auburn to be the team to meet or exceed expectations in 2020, I’m going with A&M. Crazy as it might seem to some, I have more faith in Kellen Mond at quarterback than I do in Bo Nix. Nix’s accuracy throwing the ball last season was a real concern to me, and I’m not sure those problems can get ironed out over an unusual offseason that did not include spring practice. Chad Morris is taking over the offense, and while Morris is a creative thinker who knows how to use his personnel, he’s also a coach who likes to throw the ball.

So either Morris is going to have to adjust to Nix, or Nix will have to adjust to Morris. I think the former is the most likely scenario, as it’s the one that has a higher chance of success. It’s just, I don’t know how much success it will lead to.

So this is me, officially declaring myself skeptical on Auburn for all the world to see.

I pegged the Vols as an underrated team in my Coaches Poll reactions because they were unranked. Well, they cracked the top 25 of the AP Top 25 poll, but they should still be higher.

If we look at the teams in the poll ranked higher than Tennessee planning to play this fall, we see No. 23 Iowa State, No. 21 UCF and No. 20 Cincinnati directly above them. UCF and Cincinnati I’m not going to quibble with. The Bearcats won 11 games last season, and UCF has been a Group of Five powerhouse for a few years now.

Iowa State went 7-6 last year and was 5-4 in the Big 12. Tennessee was 8-5 and went 5-3 in the SEC. So not only did Tennessee have a better record, but it achieved that record in the more difficult conference.

I have nothing against Iowa State, and I fully understand why people are high on it every year. But the Cyclones haven’t quite lived up to those expectations yet. They began last season at No. 21 and finished the year unranked. Iowa State hasn’t finished any season ranked in the AP Top 25 poll since 2000 when it was No. 25. While I would bet a lot of money that streak ends this season (the AP will not continue ranking teams who aren’t playing), I would also bet that Tennessee finishes higher.

This is one of those instances where I think there’s a lot of assuming going on. We assume that with a healthy trio of Spencer Sanders, Chuba Hubbard and Tylan Wallace that the Cowboys will win a lot of games. It’s a logical one to make, as that’s a very talented trio that not many other teams in the Big 12 can match.

There’s a flaw in it, though. The flaw is that Oklahoma State had that trio healthy for the first eight games of last season and was only 5-3. So, it’s not like this team was a juggernaut before injuries derailed the season. The Cowboys went 2-0 in games with both Sanders and Hubbard healthy, though the wins came at home against a 5-7 TCU team and a 3-9 Kansas. They were 1-2 with only Hubbard remaining, though the two losses did come to Oklahoma and Texas A&M.

Still, I’m not so convinced that Oklahoma State will be a better team than some of the others behind it. Particularly in a Big 12 that might not have anybody truly capable of surpassing Oklahoma, but has a lot of depth to its second and third tiers.

Do you remember last year when Kentucky suffered so many injuries at quarterback that it was forced to put wide receiver Lynn Bowden under center, abandon any semblance of a passing attack and still manage to go 8-5? I guess I was more impressed by it than AP voters. Now, this isn’t where I’m going to tell you that Kentucky should have cracked the top 25 if the AP was including all 130 FBS schools in the preseason poll. It doesn’t.

But there are a few teams ahead of it in the land of Others Receiving Votes that probably shouldn’t be ahead of it. For instance, the Louisville team I recall Kentucky beating 45-13 last year, or maybe even the Virginia Tech team it beat in the Belk Bowl.

The Wildcats have won 18 games in the last two seasons but are still routinely treated like the .500 team they were a few years before.

Miami is not ranked in the top 25, but it is ranked ahead of teams like Kentucky, Baylor and Virginia. The same Virginia that won Miami’s division (though Miami did beat it 17-9) last year.

This is a Miami team that finished the 2019 season with losses to Duke, FIU and Louisiana Tech. It’s a Miami team that has already lost one of its best players in Gregory Rousseau, who opted out of the season to focus on the NFL Draft.

This is the Miami team that started the 2017 season 10-0 and has gone 13-16 since. That’s the team we’re ranking ahead of a team that played in the Orange Bowl last year (Virginia), a team that has won 18 games the previous two seasons (Kentucky), and a team that won 11 games last year (Baylor).

Having said all that, I understand why. Miami has a lot of talent, and it’s added an exciting quarterback in D’Eriq King. There’s a chance King raises the floor of the Miami offense so high that the Canes go on to have a strong season. But how about we make them prove it first this time?

Ronaldinho before the judge to be fixed on his fate

The Toronto Raptors Embody the Intersection of Sports and Racial Justice